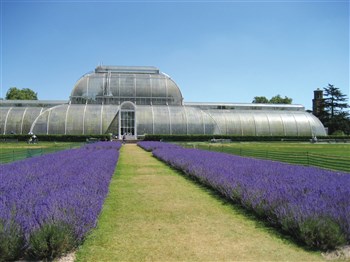 Departing Suffolk & Essex - The Royal Botanical Gardens at Kew opened more than 250 years ago and house the world's largest collection of living plants.

The gardens today present an enjoyable mix of landscaped lawns, formal gardens, and greenhouses. Equally important, Kew functions as a botanical research centre and maintains the largest plant collection in the world. The various greenhouses display plants from across the world in climate controlled environments, while Kew Gardens Gallery houses art and photographs illustrating botanical themes. Queen Charlotte's Cottage is a pretty summerhouse lying alongside a lake. The Chinese Pagoda is arguably Kew's most recognisable structure.

Also worth noting is Evolution House, a small glass building housing displays on the evolution of plant life on earth. The Grass Garden has over 600 varieties of grasses, and the Wood Museum explains the manufacture of paper and shows examples of inlaid wood cabinetry. Kew remains one of the world's premier public gardens.

Entrance to the Temperate House is included.

The Temperate House houses an internationally important collection of temperate zone plants, including some of the rarest and most threatened.

It was designed by Decimus Burton, who also designed the Palm House at Kew. Building began in 1860 and it opened to the public in 1863.

It is twice the size of the Palm House and is home to temperate plants from Africa, Australia, New Zealand, the Americas, Asia and the Pacific Islands.