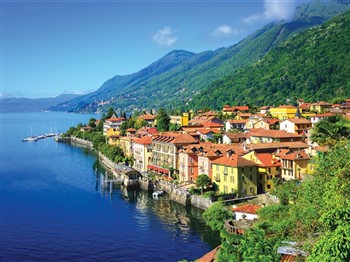 On the south side of the Alps, Lake Maggiore is the second largest lake in Italy.

On the south side of the Alps, Lake Maggiore is the second largest lake in Italy. Since the climate is mild year-round, the area is filled with Mediterranean vegetation and exotic plants. Lake Maggiore was featured in Ernest Hemingway’s infamous novel, ‘A Farewell to Arms’, when the protagonist and his lover must row across the lake in order to escape the Italian Carabinieri (think police in military uniforms). Here’s hoping you won’t have any run-ins of that nature. Lake Orta is a lake in northern Italy, west of Lake Maggiore. It has been so named since the 16th century, but was previously called the Lago di San Giulio, after the patron saint of the region. The scenery is characteristically Italian, while the San Giulio Island has some very picturesque buildings.

We have been working behind the scenes with Galloway to be able to offer you an even wider range of UK and Continental Holidays, this enables us to offer you more choice and some exciting NEW destinations. As these Holidays will be offered by both companies, we encourage you to book early to avoid disappointment.

Travel to Folkestone for the Eurotunnel crossing then travel through France and just across the border into Germany, making suitable comfort stops, for our overnight stay at the Mercure Hotel Saarbrücken Süd with time to freshen up before our evening meal.

After breakfast check out of the overnight hotel and travel through France via Basel, in Switzerland, and over the Gottard Pass then cross the border into Italy. Arrive at the main stay hotel in time to freshen up before our evening meal.

After breakfast enjoy a half day excursion to Lake Orta. This is the smallest of the Italian Lakes which has stayed off the tourist radar for decades, helping it to remain one of the most untouched of the great lakes. Orta San Giulio is the lake's biggest talking point - a pretty lakeside town full of cafes and pastel buildings. The picturesque streets aren't the only reason to visit Orta San Giulio though; it's also the closest point to the lake's largest island, Isola San Giulio. Opportunity to hop on a noddy train (price not included) into town and we can visit Isola San Giulio by boat (price not included). Return to the hotel for free time to relax around the outdoor swimming pool or take a walk into town before our evening meal.

After breakfast visit Lake Como. With dramatic mountains and ink-blue waters, Lake Como may be the most spectacular of the Italian Lakes. There are plenty of boutiques and medieval sights here, as well as many restaurants and cafes for lunch to be purchased.

Today we have a day at leisure in Stresa. The hotel is ideally situated in a central position within walking distance to places of interest. Opportunity to take a boat trip from the waterfront to the fabulous Borromean Islands, home to palazzos, villas, a fishing port and the Museum of Dolls and Toys (price not included) before returning to the hotel for our evening meal.

After breakfast we have an optional coach excursion around Lake Maggiore before continuing to Domodossola. Here we have the opportunity to embark on a panoramic 2-hour train journey on the Centovalli Railway through the picturesque 'one hundred valleys', featuring waterfall cascades and chestnut tree orchards, to pretty Locarno. After some time at leisure, we can then board a 2.5- hour boat trip (combined train & boat price not included) across the lake back to Stresa.

Today we spend a relaxing day in Stresa. Luxury villas and opulent Art Nouveau hotels line the elegant lakeside, which is ideal for a tranquil stroll. The elegant and attractive waterfront offers unforgettable views of the Gulf of Borromeo. Discover the little hive of cobbled streets in the town's old centre and purchase lunch in one of the many cafes and restaurants.

After breakfast check out of main stay hotel and return to our overnight hotel in Germany. We will stop for lunch to be purchased along the way, arriving in Saarlouis with time to freshen up before our evening meal.

After breakfast head to Calais for the Eurotunnel crossing, making suitable comfort stops. Arrive back to home area early evening.

This superb 4 star hotel is 2 minutes’ walk from the beach. Only 150 yards from the shores of Lake Maggiore and next to the pier for boat trips to the Borromeo Islands. It has a popular restaurant and rooms featuring views of Lake Maggiore or Stresa and the surrounding mountains. Stresa’s pedestrian area is just a few steps from the property. You can enjoy relaxing moments in the free outdoor pool of the Regina Palace Hotel, 150 yards away. The Milan Au Lac restaurant is perfect for a dinner with a superb lake view.

It is not possible to display the home pick-ups map because JavaScript is disabled in your web browser.