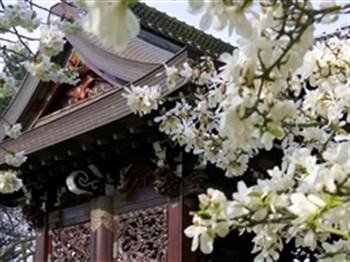 This October the Royal Botanic Gardens, Kew invites visitors to immerse themselves in the art, plants and culture of Japan with a brand-new autumn festival. The Japan festival, supported by Daikin UK, will run from Saturday 2 October to Sunday 31 October 2021 in Kew’s majestic Temperate House, the world’s largest surviving Victorian glasshouse.

In a year when travel has been limited, Kew Gardens is bringing to life a celebration of the fascinating culture of Japan which is deeply rooted in nature. A large- scale installation will tell the stories of this natural connection reflected in both art and language. The Kew horticultural team, alongside commissioned designers, will utilise the Octagon in the Temperate House to create stunning horticultural displays. This includes a contemporary response to a Japanese garden showcasing native plants, including grasses, shrubs and trees.

The festival will also showcase the magnificent Chrysanthemum, Japan’s national flower. An emotive, immersive soundscape will be heard throughout the Temperate House capturing the harmonious natural sounds of the rivers and waterfalls of Kagoshima, as well atmospheric soundscapes as from the Cedar mountains of Gifu and bird calls set across the waves of the Philippine Sea.