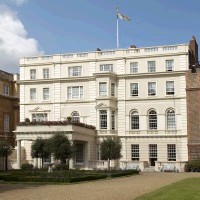 Clarence House, built between 1825 and 1827, which stands beside St James's Palace, is the official London residence of The Prince of Wales and Duchess of Cornwall. It was the London home of Her Majesty Queen Elizabeth The Queen Mother for almost fifty years. Here she entertained foreign Heads of State, charities and organisations with which she was connected, a tradition continued by their Royal Highnesses today.

What there is to see?

Visitors are guided around the five ground-floor rooms where The Prince of Wales and The Duchess of Cornwall undertake official engagements and receive guests from around the world.

The arrangement of the rooms and the grouping of their contents remain much as they were in Queen Elizabeth's time, with much of Her Majesty's collection of works of art and furniture in their former positions.

There are no lavatories in Clarence House, visitors are therefore advised to use the facilities at Green Park underground station or in St James's Park. Food and drink are not available for purchase at Clarence House. The shop sells a range of merchandise, much of which has been designed exclusively for the Royal Collection.

After your visit to Clarence House the coach will collect you and continue to Covent Garden where you'll have some free time.